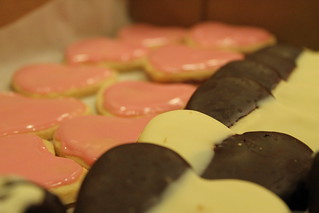 Picture above: some of me and my mentor’s baking from my first sessions with her.

Well, after a few weeks in the goings, I have successfully obtained a highly skilled mentor and begun learning some useful techniques of baking. You could say I have officially ‘cracked open’ my project, and a few eggs!

I met with my mentor for our first official meetings this past Saturday and Sunday, and we got right down to business working on some baking. So far, my mentor has been teaching me the different techniques and skills and then getting me to try them under her supervision. We’ve done this in the form of baking; she will prepare the first few cookies(for example) and then proceed to guide me in making the next few. Even in the short amount of time we have spent together, I have learnt tons, and I am strongly enjoying our baking time.

In terms of relating our first session to Edward de Bono’s How to Have A Beautiful Mind, it may not be quite as straightforward.

While meeting with my mentor, I tried to keep track of our conversations and everything she was saying in my head. I agreed with many different concepts and tools she explained to me that seemed highly useful in their respective desserts or tasks. I hadn’t heard of all of them before but they seemed like great solutions to simple problems that you may run into while baking. Some of these problems include her suggestions to melt chocolate in a bowl placed in a pot of boiling water on the stove, as opposed to in the microwave. This technique prevents burning the chocolate and also allows you to have greater control of the temperature and keep a close eye on it as it melts. Another handy trick, was to ice a small ring of icing around the edge of the cookies using a  piping bag before icing the entire surface. This acts as a barrier to prevent the icing from overflowing onto the edges of the cookie later on. You must let the ring harden before icing the rest so that it is firm when applying the rest of the icing. All of which I strongly agreed with and seems very logical.

As for disagreeing and differing, there’s not nearly that much, in fact, there isn’t really anything I can think of that I disagreed or differed with my mentor on. The reason for this is that I highly respect my mentor and her extensive knowledge of her craft, and in all honesty, everything she advised me of seemed perfectly logical to my mind as well. I have hardly any experience in this area of skill, so I might not be able to tell if she was doing something incorrectly, but at this point, I am focused and appreciative of building a strong mentor to mentee relationship and developing greater knowledge in the area. Maybe later down this in-depth road I will encounter something I can’t quite wrap my head around, but for now, it all seems amazing. At points in our conversations I did make attempts to bring up different solutions or paths for which we could take when making a certain part of a dessert or treat. For example, when she explained her secret ingredient(which I don’t want to expose) for making the icing shiny, I asked if it would affect the icing in any other way if you were to not add that ingredient. She answered saying that the only real effect on the icing is its appearance, which I then agreed with and understood. I suppose you could say that was a slight differentiation in our views on the future but I was really just unsure and asking for further information on what could occur.

Overall, my project is going very well. Our class integrated essay also proved very useful for me to gain more knowledge of some basic baking skills. I have been enjoying what I’ve been working on with my mentor, both baking and intaking, and I am looking forward to what is to come in the near future. Now what’s next on the menu?