Finally, bake the dessert in the oven for three weeks at 400 degrees celsius.

Wait, that’s the last step of the recipe! Oh my gosh, that’s it, I’m almost done!

Yes, my in-depth project is nearing a close, and as I put my project in the oven for it’s final stage of baking, I can only hope it turns out alright. I’ll put my finishing touches on my presentation dishes and plans so that I’m ready when the dessert comes out, and I can get my icing ready so I’ll be lickety split, before it gets licked up, in literally putting the icing on the cake. As in-depth nears the end I am beginning to work on my preparations for in-depth night itself. I have spent many long sessions with my mentor trying different recipes and learning about different techniques and types of baking, along with some tricks of the trade. Nonetheless, I’m not quite done yet, I still have to be sure not to burn my cake!

In my most recent sessions with my mentor, this past weekend, we spent our time baking three separate dishes over the course of two days. The dishes we prepared this time were a chocolate wafer layer cake, “old-fashioned cookies”, and a secret dish that I am considering making for in-depth night.

For the layer cake, we prepared the cake portion of the dessert on the first day, and made the icing, in this case acting as the glue, and assembled the cake on day two. The cake was much sweeter than I expected and fairly firm in its texture. Below is a picture of the cake being mixed and the portion which was later cut in half and stacked in between icing and wafers to create the layer cake. 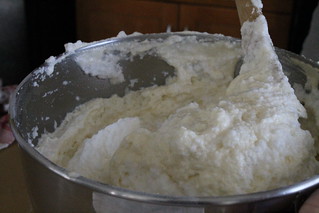 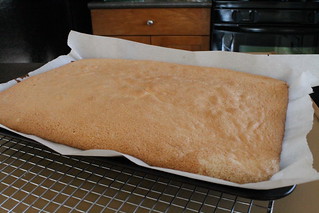 The second dessert of our weekend baking adventures, was pressed cookies, or as my mentor called them “old-fashioned cookies”. I believe she uses this name because we made them using an old family cookie press of hers that she brought form her home in Croatia. It was very cool to use this press and it made the cookie cutting very efficient. It also allowed you to choose from multiple designs for your cookies. For these cookies, we made the dough on day one and then cut them and baked them on day two. The recipe made a very large amount of cookies so it took a while to cut and bake them all and I came home with a few more treats than expected. Below are some pictures of the cookie cutting/pressing and the finished products. 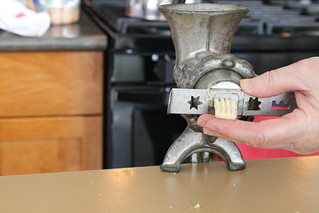 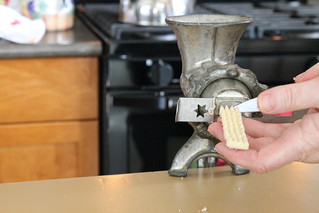 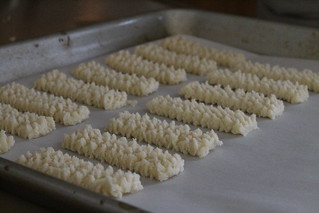 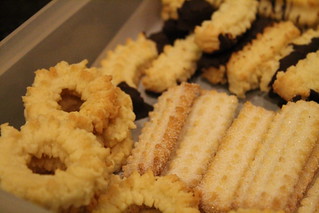 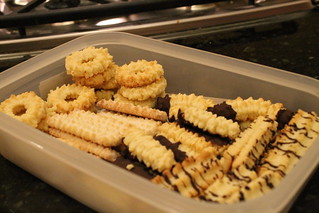 (sorry for all the pictures being in a line, when I put them in via Flickr link, my blog doesn’t allow me to edit the size or location of the photo)

Finally, the third, mystery, dessert, is… Well I can’t tell you, because then you would know what I’m going to make on in-depth night, which I guess would be okay, but don’t you think it would be better as a surprise? Well actually, I might not make this dish for the event night. I was planning on it, but for one, in my mentor session, it was rather difficult to create, which is a good thing because it challenges me, however, there are also some time constraints for the dish and I’m not sure how it would work for the actual event. We’ll see what works itself out in the coming weeks, but for now, I’m still looking for a way to present this dish to you all! Here are some pictures of a part or the mystery dessert/dish, as a small hint or teaser perhaps. 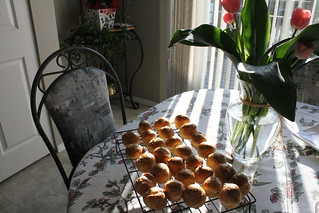 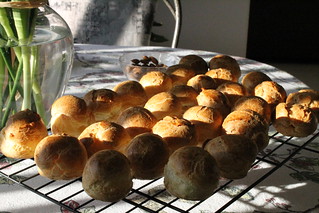 To finish off this post with some insight from de Bono, I have chosen to write in the sections of emotions and feelings, and diversions and off-course. I think these two sections of de Bono’s writings come up often in my mentor sessions, sometimes related to baking, and sometimes “off-course”.

One example of both of these categories, is a conversation with my mentor from a session a month or so ago. As we have to wait for the dishes to bake, if we are not working on another dish while the first is in the oven, then we often end up talking about sometimes unrelated topics. Sometimes we will discuss the dish we are making, or go over recipes for later or alternatives for when making a certain dish. However, the conversation that I am going to use, was when my mentor asked me about my in-dpeth project itself.

Although this conversation was about my project, it was more off topic as we were waiting for a dessert to bake in the oven, so we had no rush or urgent matters to discuss. It was also a more broad discussion, not focused specifically on what we were doing that day. So this conversation was a diversion from the topic, or an off-course conversation.  My mentor asked me what subject the in-depth project counted for when we are marked on it, and I actually wasn’t sure. Initially I tried to puzzle my way through it and answer a couple other of her general questions about the project. She was rather surprised that it was unclear what subject it went towards, and also largely because I was unsure so came across somewhat unclear as to whether it counted for much at all. At this point in the conversation we both were feeling confused, but we hadn’t necessarily clearly shared that emotion with each other yet. I then clarified to her that I was really not sure as to what area it counts for in large part. I had made some logical guesses, but I wasn’t positive. She then answered with a “Ohhh, I see” type of reaction, and now we were both on the same page as to where the other stands in terms of understanding if the issue. Now we both have a more positive and less confused outlook and emotion on the conversation, tying in to the other option of posts’ section on “attitude”. From here  we continued to discuss this topic until it became clear there wasn’t much more for either of us to say, at which point, she gathered over the kitchen island with me and we looked through a cooking book of hers and she showed me some tips for different baking steps.

I have come a long way in my baking endeavour, but as I said, I still have a little ways to go before the desserts come out of the oven. I’ll be back on those pots, at the ready, planning for the final hurrah of in-depth night! I hope to see you there, and if not, have a wonderful day, and week, and year, and life!

Bye for now, and I’ll go prep those piping bags to put the icing on my project!