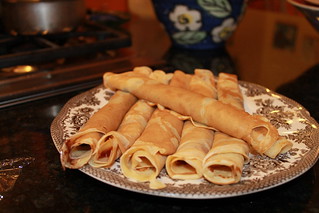 You may be wondering why I chose this title for my post, or how it relates to the above picture, crêpes. Originally I was actually going to title this post, ‘The bread Arrives’, as a metaphor for the stage I am at in my project. The bread is being served at the table, one of the first dishes of the meal, and draws you in to the rest of the experience and what is to come. However, I realized that this might not be suitable as I am doing my project on baking, not cooking or full meal cuisine. So I decided on ‘The Mixing Begins’. Nevertheless, you may still be wondering how this title relates to the picture or my project. Well, similar to the bread metaphor, mixing is often one of the first steps in a recipe and provides the base for everything to follow. It is used in virtually any baking recipe, and is a vital piece of creating the unique texture special to the dessert or dish. Furthermore, when mixing, you can often add in secret ingredients or leave out certain things to create a specific result. This is where the title relates to the above(and below crêpes) picture, some crêpes I made with my mentor on my second meeting. 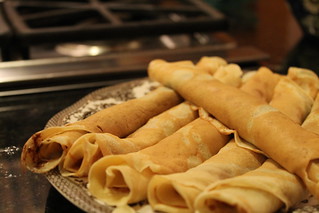 As an additional skill to the cookies, brownies and handy truffles we were already making on our first and second meetings, my mentor taught me how to make some delicious and simple crêpes. As mentioned, this used the skill of mixing, but also controlling pan temperatures while cooking, greasing the pan, working at a slightly faster pace to try to keep an even crêpe all around before it dries in the pan, and some delicious taste testing. As previously, my mentor made the first few and demonstrated how to accurately and successfully create the crêpe, and then allowed me to try cooking some and practice applying the skills taught. I found a couple things difficult such as creating a round circle and being sure there were no holes in the edges of the crêpe, but after we coated the insides with a rosehip jam and some with Nutella, they were just fine.

As for continuing with de Bono’s How To Have  A Beautiful Mind, I found many connections and relations to my time with my mentor. In this week`s post and mentor time, we were encouraged to think about and mentally explore two areas of his book: ‘How to be Interesting’ and ‘How to Respond’. One of the examples de Bono gives on how to develop an ‘interesting’ conversation, is to use the phrase “Now that’s interesting.” This phrase deepens the conversation by first showing your interest in the topic or idea, and further, pushing you to explain why you are interested. I found myself saying this or a phrase very similar such as “That’s neat!” or “Oh that’s cool!” very often in my most recent meeting with my mentor.

Building off of my last post, many of the techniques or tools my mentor used that I agreed with, caused me to give the initial reaction of one of the above. Some of these techniques include her handy trick of forming a ring of icing around the edge of a cookie and allowing it to harden before icing the rest, creating a boundary stopping the icing from overflowing onto the sides of the cookie. Another being a very useful technique for greasing a glass dish for baking the brownie in. This consisted of oiling the inside of the dish with canola oil, followed by tossing over a large amount of flour to coat the inside of the dish. She then tilted the dish in all four directions one by one and tapped the flour around the edges so as to cover all areas of the dish. Finally she disposed of any excess flour and placed a sheet of parchment paper on the bottom of the dish with two ends remaining accessible from the top of the dish. The oil and flour technique I thought was very unique and creative and is a useful tool I can use in the future in multiple recipes. Also, I thought how she left the parchment paper sticking out was very clever as then, she explained, when the brownie is cooked, you can remove it fro the glass dish by simply pulling the two ends of the paper upwards and out. Similar to this, when making the crêpes, I also had to grease the pan. These will both be very useful and are a very practical skill which is one of de Bono’s suggestions for responding.

Another of de Bono’s propositions for ‘How to be Interesting’, is to ask ‘What if’ questions. One situation that I applied this to, mentioned previously, was when my mentor added corn syrup to the cookie icing to make it more glossy.This was very clever, but I wondered what effect this might have on the overall consistency of the icing. So I asked, “What if you didn’t put in the corn syrup?” Her answer was that it wouldn’t have any effect other than it wouldn’t be as shiny. Another situation in which the ‘What if’ card was played in our conversations, I didn’t actually have to ask. When I was pouring the mixture for the crêpes, and having some difficulty, my mentor provided me with some information on what impact any holes or imperfections would or wouldn’t have on the end product.

Lastly, something I found very useful and interesting in our conversations was the experience and information I gained from my english research essay on the crème brûlée, macarons, and cheescake. My mentor wanted me to try a small lemon meringue cheescake cupcake that she had been working on to test how it tasted after being stored in a fridge. May I just say it was delicious, but I could distinctly pick out the different textures and techniques that I learned about through my paper. I brought this up as well as in other conversations together and it served as an interesting connection and link even with my minimal experience. This is yet another thought of de Bono’s for ‘How to be Interesting’ and also ‘How to Respond’.

I enjoyed thinking about all these different thoughts and analyzing my conversations with my mentor using de Bono’s ‘How to be Interesting’ and ‘How to Respond’, and, of course, creating all these delicious treats. Unfortunately I don’t think very many of them will make it to school for some of you to try next week, however the next batch might! Thanks for reading and I look forward to adding in the next ingredient to this delicious project!